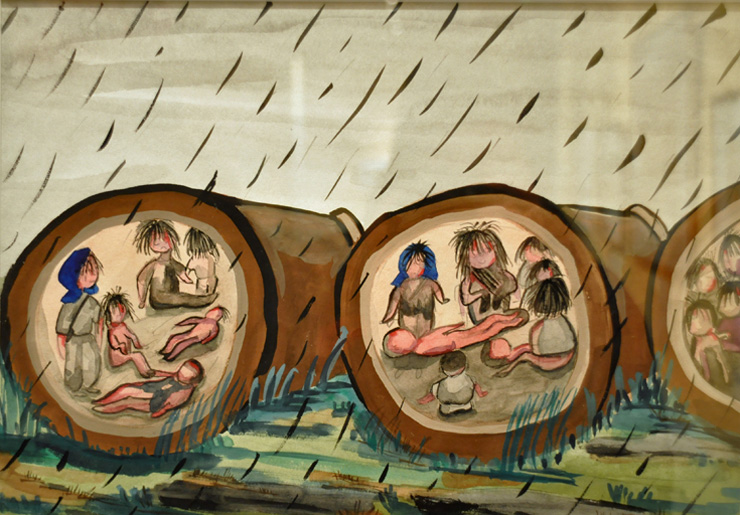 Inside clay pipes
August 6, 1945
2100m from the hypocenter
Sumie Sasaki (6 at time of bombing, 62 at time of drawing)
Four in my family (father, mother, younger brother and I) were exposed to the bomb at home. On our way to escape from the bombing, the rain began to fall. It was the black rain. There were clay pipes in a grassy area in a marchland. We stayed inside the clay pipes until the rain let up. 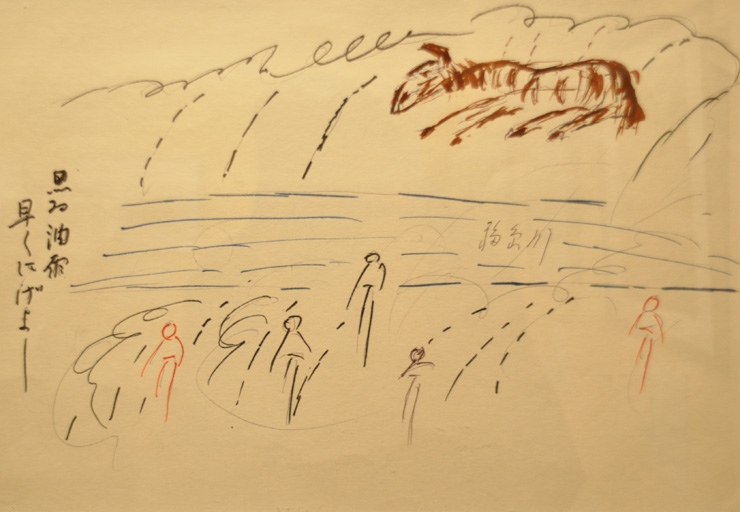 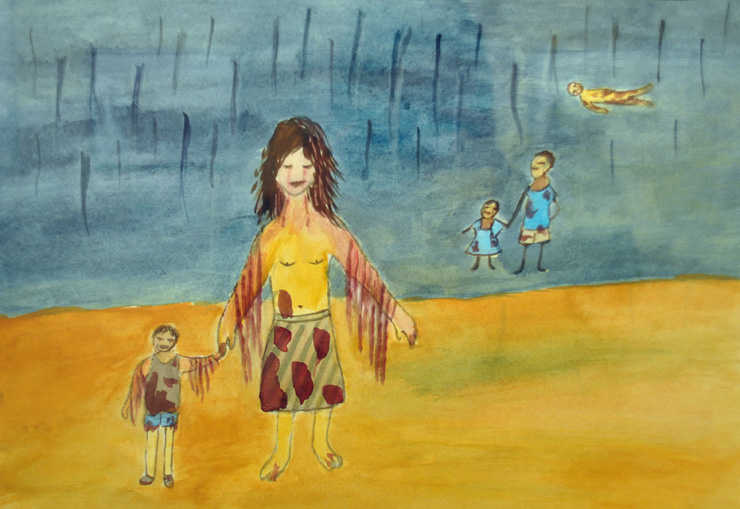 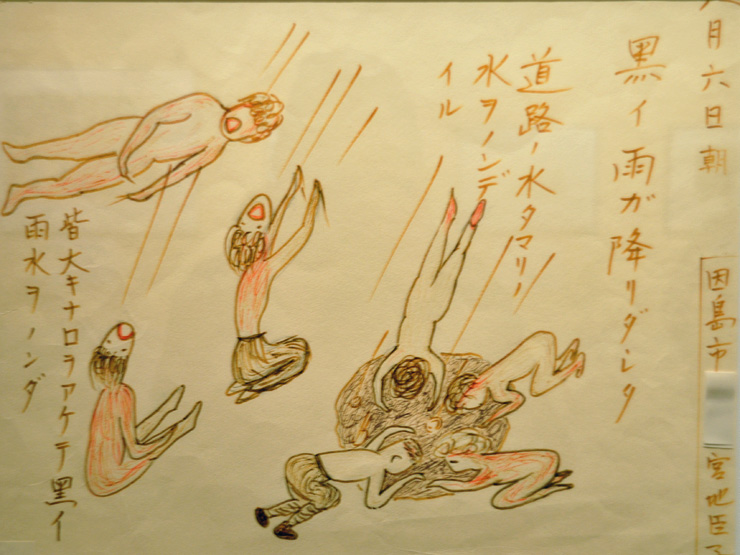 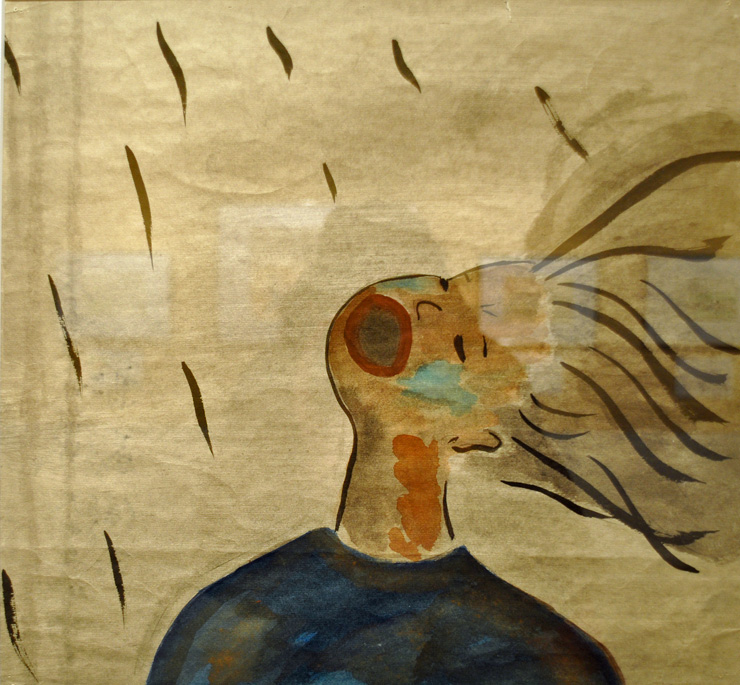 Because I was Thirsty…
August 6, 1945
260m from the hypocenter
Akiko Takakura (19 at time of bombing, 49 at time of drawing)
When the black rain started falling, I opened my mouth wide to the sky to try to drink the suddenly falling black rain, because I was thirsty, suffocating from the flames that surrounded me, and drank it. 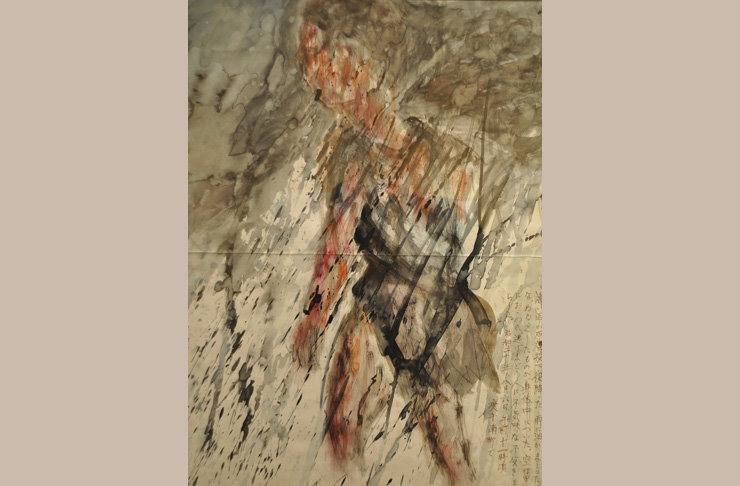 Otagawa river
Yoshio Hamada (26 at time of bombing)
1350m from the hypocenter
I headed for the Otagawa River in serious condition due to the A-bombing. It was a brutal spectacle. Suddenly, black rain started falling. 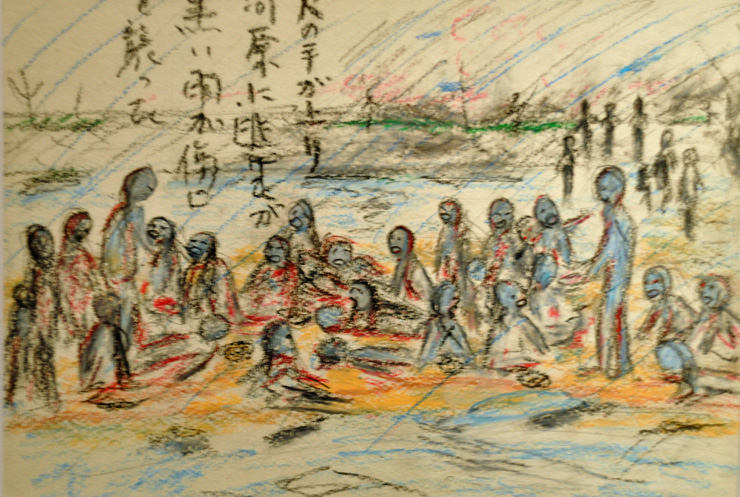 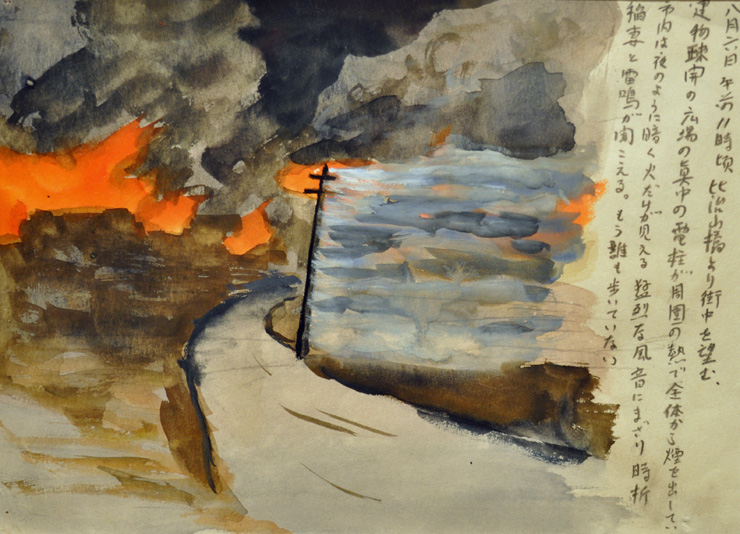 No one was walking any longer
August 6, 1945, around 11:00 am
1710m from the hypocenter
Hidehiko Okazaki (13 at time of bombing, 47 at time of drawing)
The city was dark like night. The only things my eyes could see were flames. I heard the occasional sound of lightning and thunder mixed with the sound of fierce winds. No one was walking any longer. 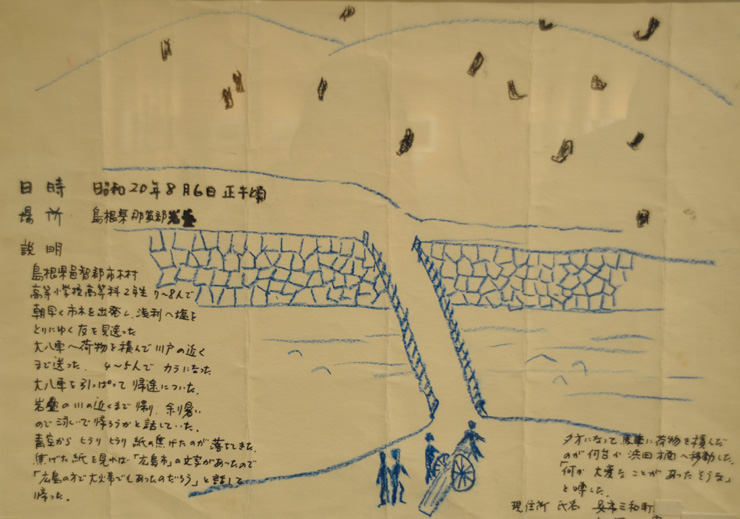 Japanese characters for Hiroshima city
August 6, 1945 around noon.
52,3 km from the hypocenter.
Hiroshi Ueda
Pieces of scorched paper were floating down from the blue sky. Taking a look at one of the pieces, I found the characters ’Hiroshima City’ on it. So, I said, ‘there must have been a big fire in Hiroshima’ and left for home. 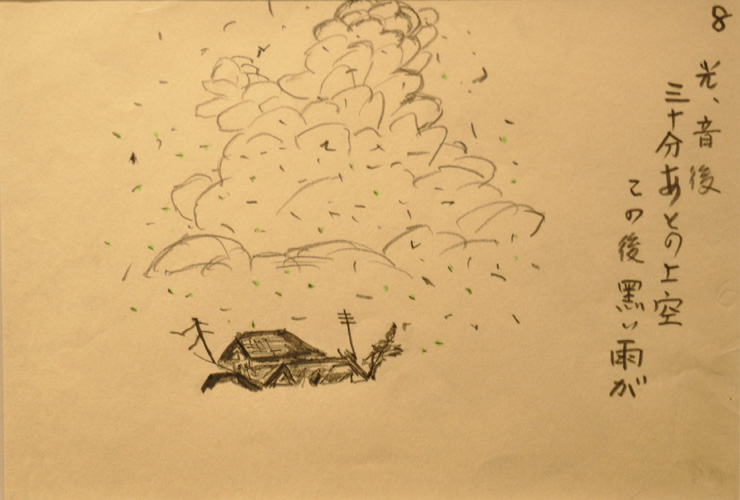 Falling down and floating down
August 6, 1945 around 8:45 am
3700 m from the hypocenter.
When looking up in the sky, I saw thin plates and fragments of galvanized iron sheets falling down from the sky leaves and dust floating down. Even the green of small leaves was clearly visible in the dusty air. Where on earth had these leaves swirled up from into the air and then reaching here ? I’m sure it wasn’t just a cloud of dust. Then I sensed the same sour smell of old wall plaster like I had smelled in building demolition works. 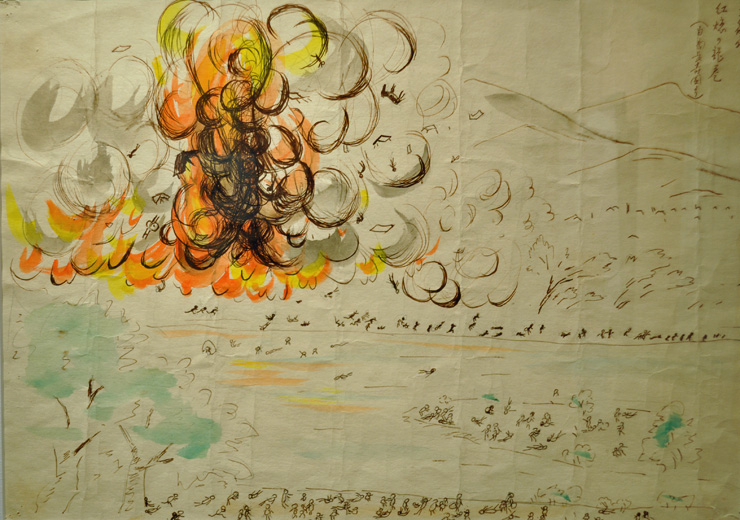 Like a raging beast
August 6 1945 afternoon
Chiyoe Kagawa (39 at time of bombing, 68 at time of drawing)
In the roaring sound of the spreading rage of flames, there were several explosions and spewing black smoke. Then, I saw a dark red tornado developing with a kind of bizarre hum. It swirled hight up, lifting objects ranging from roofs to people, horses, cars, storm doors, tatami mats, and galavanized iron sheets. The angry tornado raved like a raging beast, hurling everything into the fires and rivers and onto the ground. 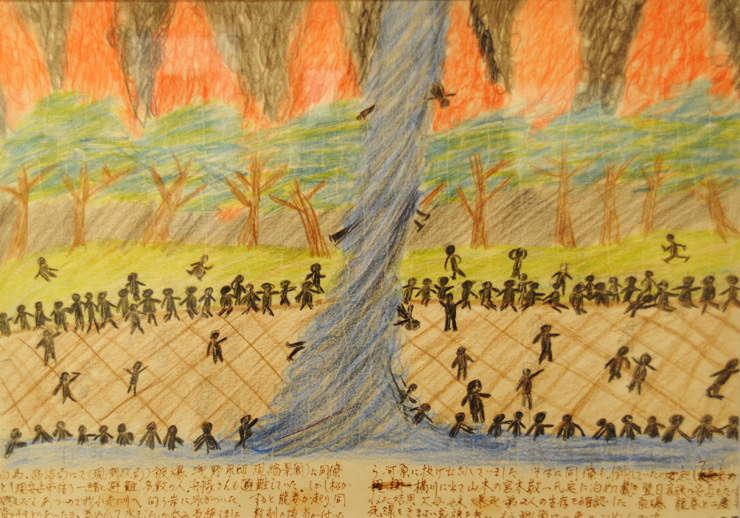 Hurled down to the Riverside
August 6, 1945
1300 m from the hypocenter
Hiroko Fukada (18 at time of bombing, 48 at time of drawing)
People scrambled to the river due to the heat from the burning pine trees. When I swam across the river to the opposite bank, a tornado developed and my coworker and I were swirled up in the tornado. Joining our hands, I nearly drowned in the swirled-up water, swallowing a lot of water, and then passed out. After a while, when I came to, I found that I had been hurled down to the riverside. 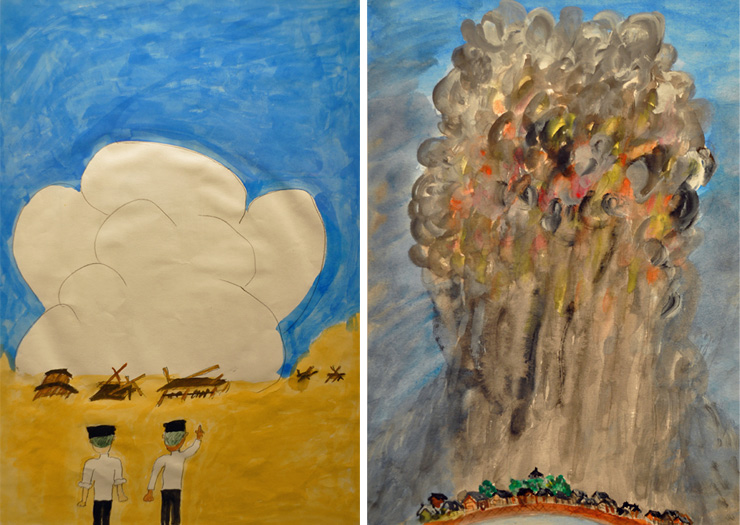 Heavenly beauty
August 6, 1945
3600 m from the hypocenter
Miyoshi Kokubo (17 at time of bombing, 74 at time of drawing)
I saw a developing cloud. The scene was a heavenly beauty where dazzling morning sunlight was reflecting onto the snow-white surface and the cloud itself was growing in a moment, clarifying its boundary with the blue sky. Under the beautiful phenomenon, an unearthly tragic event was developed at the same time. 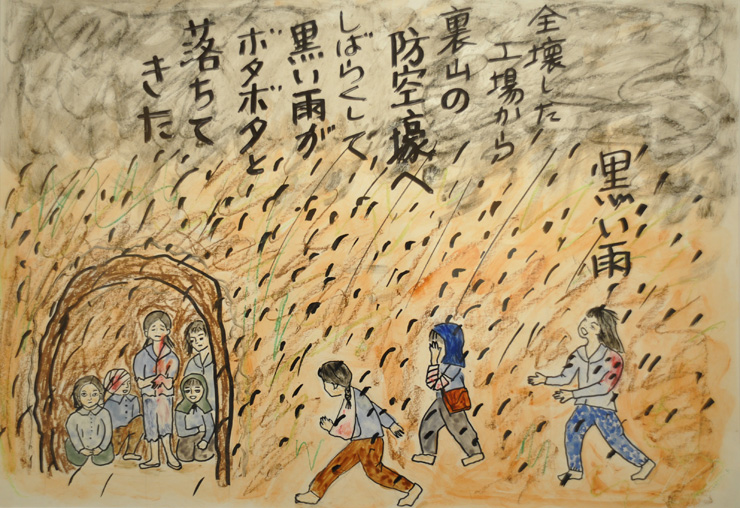 Stained bloody outer garments and bandages with black dots
August 6, 1945
700 m from the hypocenter
Yuko Nakamura (13 at time of bombing, 70 at time of drawing)
When washing my face with a bloody nose at a well outside, large drops of rain began splashing down. ‘America sprinkled petroleum!’ ‘Maybe they’re trying to annihilate us by setting fire on the mountains.’ Our faces stiff with fear, all of us ran into air raid shelters. The rain, which had been mixed with pitch black sand, stained our bloody outer garments and bandages with black dots. It was later revealed that this black rain was a dangerous rain containing radioactivity. 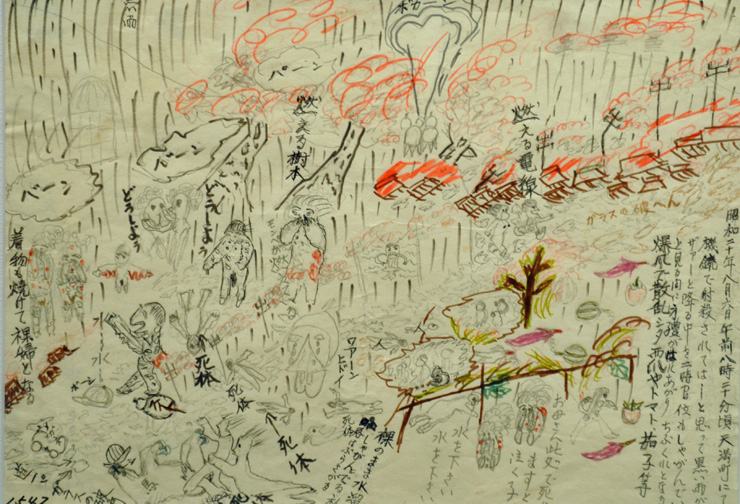 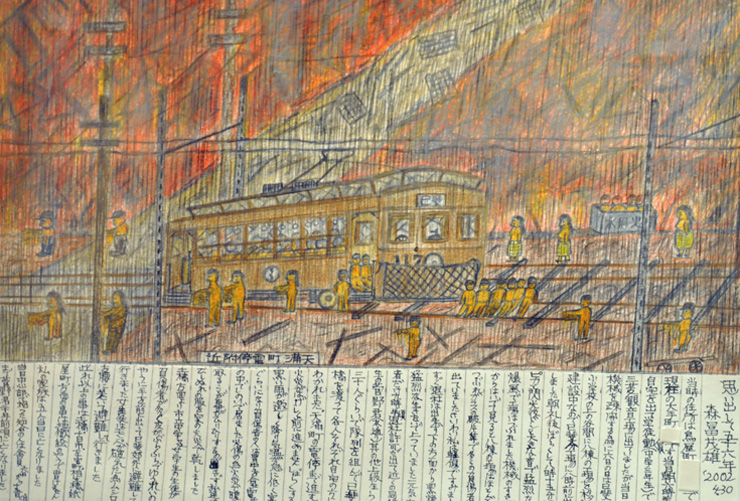 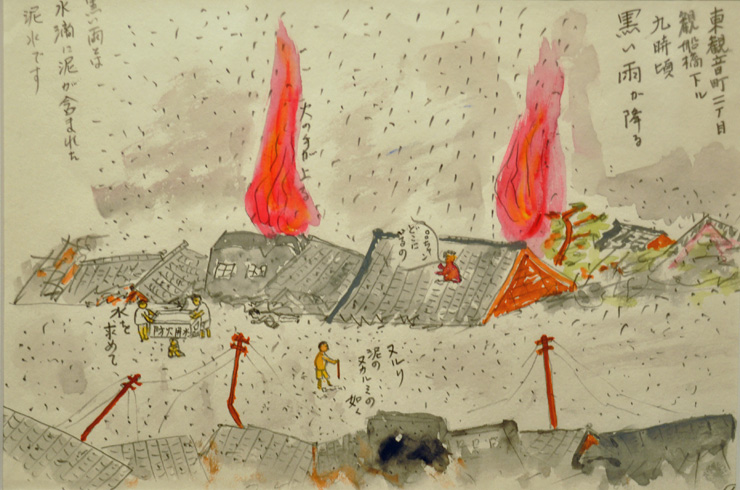 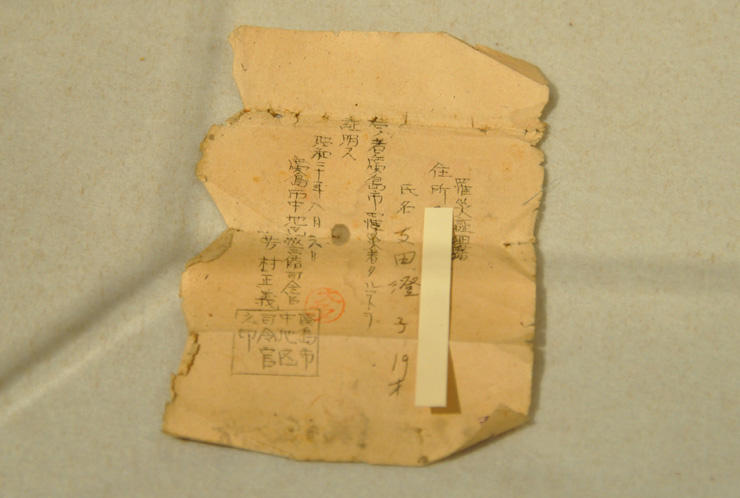 Disaster certificate
Donated by Sumiko Tomoda
Approx. 700m from the hypocenter Moto-machi
Sumiko Tomoda, the donor (then 18), was exposed to the bomb at her workplace, the Chugoku Regional Military Headquaters. Sumiko was blown by the blast and covered with blood, with pieces of glass stuck into the right side of her face and arms. Even today, she has pieces of glass inside her body.
Disaster certificate were issued to those who suffured war damage immediatly after the bombing. With this certificate people could receive food rations and use public transportation for free. 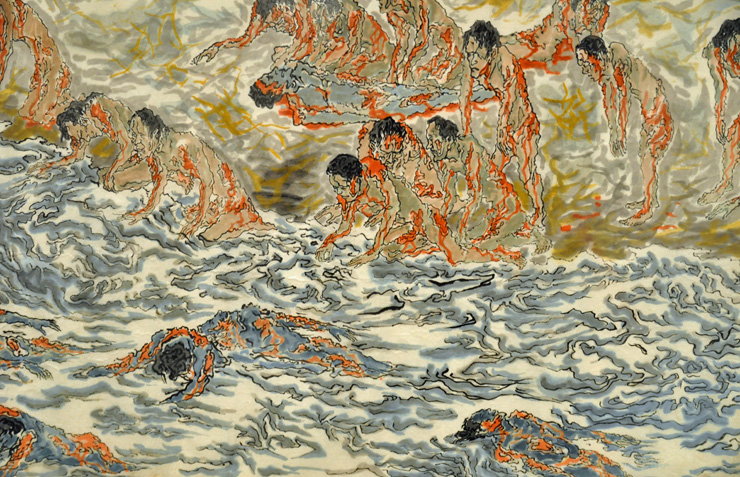 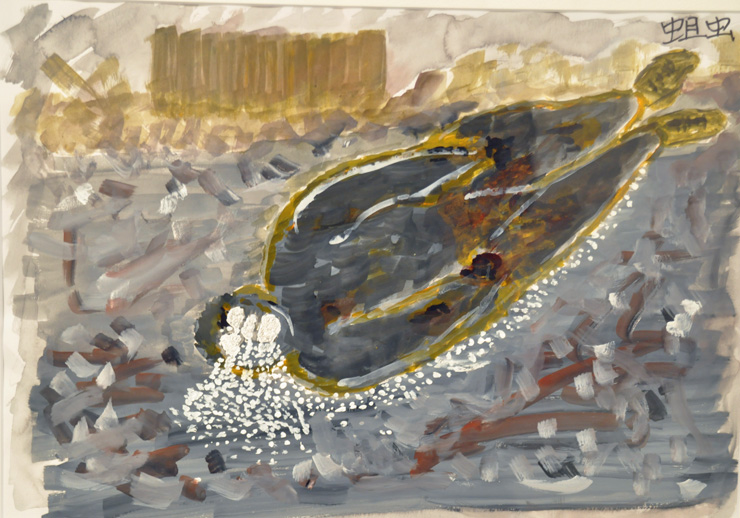 Maggots
Drawn by Hisayuki Fujioka
Around August 10, 1945
Approx. 1250m from the hypocenter
Near Takanobashi Intersection
Corpses were swarming with maggots in people’s eye, noses and mouths. The maggots were crawling in, out of, and around all the bodies with an offensive odor. 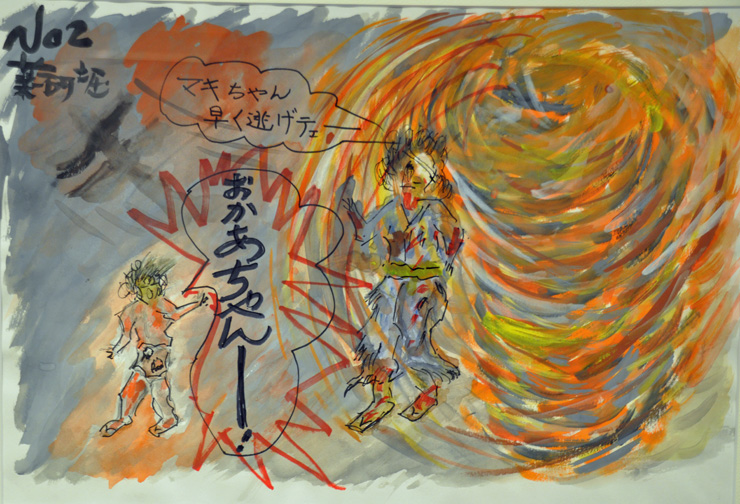 Mo_m!
Drawn by Hisayuki Fujioka
August 6, 1945, around 11:00 am
Approx. 1050 to 1400m from the hypocenter
Near Yagembori and Tsurumi-cho
‘Run!’ Shouting so, my mother let go of my hand and told me, ‘Mom will catch up with you soon.’ The next moment, raging flames swirled like a tornado, covering my mother’s body and engulfing her. 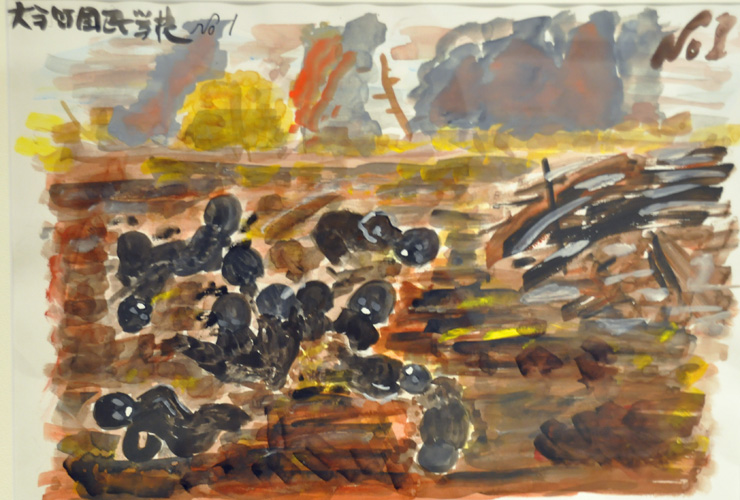 Otemachi Elementary School
Drawn by Hisayuki Fujioka
August 7, 1945, around 7:00 am
Approx. 1000m from the hypocenter
Ote-machi 8-chrome (now Ote-machi 4-chrome)
At 8:15 am when lining up in the schoolyard during the morning assembly, all the first, second ans third-year students were exposed to the bomb and sustained burn injuries. Some were burned to death due to the fire in the school building. Students who were at the front or back were blown away by the blast and burned to death. 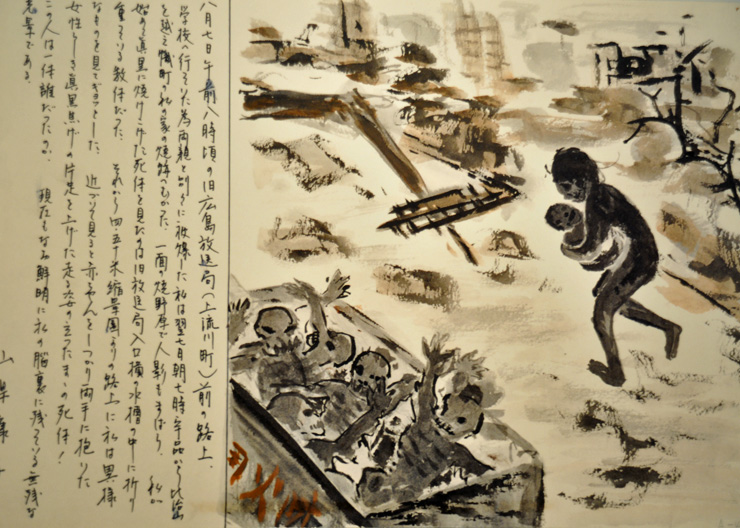 Dead mother in running position, still holding her baby
The 7th around 8:00 am
1000m from the hypocenter
Drawn by Yasuko Yamagata 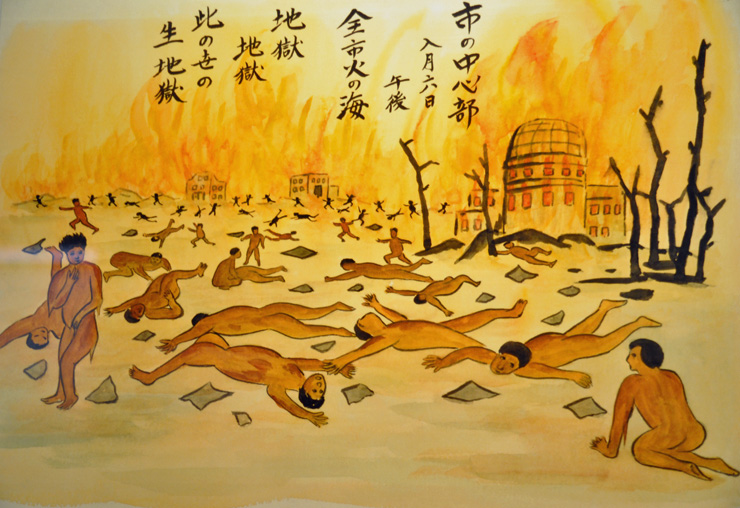 Sea of flame near the hypocenter
Afternoon of the 6th
300m from the hypocenter, Aioi Bridge
Drawn by Kenichi Nakano
The area near the hypocenter was engulfed in flames.
Countless victims lay on the ground. Starting at about 10 in the morning, the city burned all day long, peaking at 2 to 3 in the afternoon.